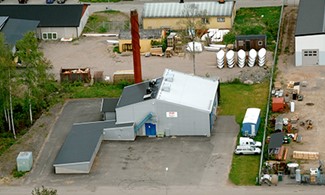 Rottne is a small town located 19 kilometers to the north of Växjö city in Sweden with 2427 residents. Rottne falls under the administrative jurisdiction of Växjö city municipality. The municipality is actively engaged in reducing its environmental footprint and has pledged to eliminate fossil fuels by 2030. In nearly the entire municipality, district heating is the main source to provide for the residents’ space heating and hot water needs. There are several DH networks in the region including the one in Rottne. The Rottne DH system was commissioned in 1998, and due to the active efforts of the operator VEAB, which is a company owned by the municipality, it became 100% fossil fuels free by the year 2012. Today it is fired by 2 boilers, which use locally sourced biomass from nearby forest and a peak boiler fired by bio rapeseed oil. Achieving a 100% renewable energy mix was not enough to stop the Växjö city’s efforts in achieving its climate goals. It was decided to further improve the energy efficiency which would not only result in reducing CO2 emissions, but also lower the total cost of production. The STORM controller which is largely an artificial intelligence algorithm running in the cloud, combined with IoT sensors placed in buildings was a low cost solution fit for the purpose. Thanks to STORM, the peak oil boiler consumption was reduced by 12.75% in just 4 months of testing, resulting in CO2 emissions savings of 2.9 Tons and cost savings of 2200 EUR for 9 buildings.